Recently, I came across a news story that I felt I wanted to write about. The story was about a man, Armani Faison, who was raped and killed in a Philadelphia prison by another incarcerated person in 2021, and it has recently picked up a bit of attention as the family has decided to move forward with a lawsuit against the city. You can read more about the incident here. Please be warned, the story could be very triggering, as could the excerpt from the story that is quoted below:

Massey attacked Faison for hours as his cries for help and those of inmates housed nearby went unanswered. Authorities have said that Massey at some point activated the cell’s sprinkler system, which flooded the cell. Still, the suit said, no one came to Faison’s aid.

I thought I would share what my initial thoughts were.

My first reaction was being disarmed by how angry and sad I felt. This suffering that he and his family and community must be enduring is heartbreaking.

Then I began to think about the multiple human rights violations that occurred and the severity of the violence and trauma.

I thought about the lack of mental health services made available for communities and for incarcerated populations. I am reminded that we collectively do not have fair or comprehensive conversations about mental health and its correlation to violence. Even still, while mental health could be a factor, most people who deal with mental illness aren’t perpetrating violence because of their mental health.

I note how race and gender play a role in what occurred in this space. I can’t help but be curious if there was less intervention because they were profiled as men. The negligence in assuming “boys will be boys”, that violence and assault are not only expected in prison but are the building blocks for how men are encouraged to treat each other. There is no urgency to respond to calls for help and assistance, and the removal of permissions for self-defense and autonomy in a system designed for punitive action and surveillance only creates the conditions for someone to be a victim.

I am always thinking about transformative justice and transformative responses that could prevent this violence from happening. As I read through the story, I consider the expansive policing and military budgets that are devoted to supposed adequate staff and resources in these institutions. And I often make assessments based on performance over potential. Afterall, this appears to be the fifth person to have suffered within their custody. 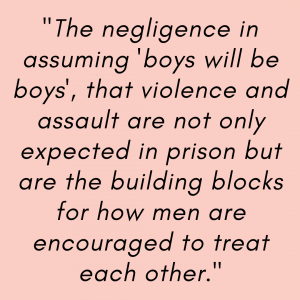 Secondly, I think about housing as a prevention tool for violence. The article stated there is not adequate space for people who are incarcerated to keep them separate from one another if necessary. This is a curious problem considering many of those who are incarcerated are also housing insecure or experiencing houselessness or homelessness. Reasons for this include eviction, poverty, or discrimination. After having contact with the criminal system, people can then face discrimination as formerly incarcerated, or face other barriers that disrupt their ability to secure stable housing. People may then rely on making decisions or exercising behaviors and attitudes that could be considered criminal or unethical in order to survive.

I think about the transformative vision of how many unaddressed harms occurred. These may not have necessarily led the perpetrator to commit any particular crime, but it did lead these two men to be together in the same place. It feels strange to argue that we cannot find spaces for people so that they aren’t together, causing harm. Armani was a non-violent offender; he could have been sent home rather than incarcerated. The perpetrator, statistically, would not have had access to do harm to him if he had just been at home.

Violence, just as non-violence, is a choice. We cannot excuse that Massey chose to do harm, but we can think of ways to consider how people like him might be limited in their ability to act, or not act, on the decision to commit violence.

This leads me to my next point – that Armani was arrested on a minor, non-violent charge of shoplifting. In his arrest, the property where the theft occurred was being protected. We say that we need these systems to keep us safe and “to serve” and “to protect”. But who was protecting Armani? So many often ask, if we abolish these systems, if we transform these systems, what do we do with rapists and murderers?

This man, Kevin Massey, a rapist and a murderer, was already in prison. He was then delivered a victim by the system. He was already in prison, and yet still nothing has changed. He still committed violence. These are preventable deaths that have occurred. What do we do now? Who gets held accountable?

This system is not working. We are in denial if we go any further without acknowledging how gross, unjust, and neglectful we have all been to allow such an institution to remain in place.

This website uses cookies to improve your experience while you navigate through the website. Out of these, the cookies that are categorized as necessary are stored on your browser as they are essential for the working of basic functionalities of the website. We also use third-party cookies that help us analyze and understand how you use this website. These cookies will be stored in your browser only with your consent. You also have the option to opt-out of these cookies. But opting out of some of these cookies may affect your browsing experience.
Necessary Always Enabled
Necessary cookies are absolutely essential for the website to function properly. These cookies ensure basic functionalities and security features of the website, anonymously.
Functional
Functional cookies help to perform certain functionalities like sharing the content of the website on social media platforms, collect feedbacks, and other third-party features.
Performance
Performance cookies are used to understand and analyze the key performance indexes of the website which helps in delivering a better user experience for the visitors.
Analytics
Analytical cookies are used to understand how visitors interact with the website. These cookies help provide information on metrics the number of visitors, bounce rate, traffic source, etc.
Advertisement
Advertisement cookies are used to provide visitors with relevant ads and marketing campaigns. These cookies track visitors across websites and collect information to provide customized ads.
Others
Other uncategorized cookies are those that are being analyzed and have not been classified into a category as yet.
SAVE & ACCEPT