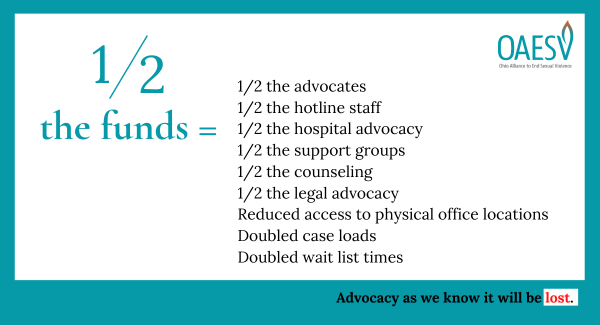 In an era of reduced taxes and efforts to slim down federal agencies, the Victims of Crime Act (VOCA) grant should have been a conflict-free solution to funding the non-profits our government relies on to support crime victims. Developed by the Reagan Administration, the VOCA fund is comprised predominately from federal conviction fines. Over the past three decades, the federal government has distributed VOCA funds to the states, who determine funding for individual social service providers.

The reliance on VOCA is logical – governments historically rely on non-profits to fill voids for necessary constituent social services. Non-profit staff have local community knowledge and highly developed content area expertise, both of which allow for more effective and personalized services. It is also significantly less expensive for governments to fund local providers than to replicate such services across their full jurisdictions.

Unfortunately, the VOCA grant did such an effective job for so many years filling the need for crime victim services in Ohio, that our state and local governments did not need to cultivate equivalent funding streams. Yet, without creating supportive funding, Ohio created increased demand for VOCA-funded services. For example, Ohio lawmakers have put strong emphasis on processing sexual assault forensic examination kits in the past several years, increasing the number of sexual violence survivors involved in prosecutions, thereby increasing the demand for community-based rape crisis advocacy. Similarly, in 2017, Ohio voters passed Marsy’s Law, increasing the demand for advocates to ensure that the judicial system complies with expanded victim rights. VOCA funds the positions necessary for compliance. Further, the executive and legislative branches increased efforts to end human trafficking, further expanding advocacy demand.

Both the federal and state government have established reliance on and satisfaction with non-profit crime victim services, and now the Ohio government has increased reliance on these services. But this year, Ohio’s VOCA allocation was cut by more than $20 million. Government officials are telling recipients to find other funding streams to rely on. This push to rely on other funding misses a fundamental reality – the government relies on us to provide essential victim services, and now they want those services for free. VOCA-funded programs provide, among other things:

The current reality facing victim service providers is bleak. The 2020 VOCA cuts exceeded even the wildest of speculations from service providers that monitor VOCA deposits, disbursements, and forecasts. This cut represents a historically abrupt shift in federal values – a reduction in prosecutions and fine collections, to the detriment of victims all over the country.

Effective immediately, whole counties lost access to rape crisis services, prosecuting attorneys found themselves without advocacy staff needed to comply with Marsy’s Law, and some domestic violence service providers began reducing their staffs. Agencies that work with victims across government systems have already terminated advocates. Free standing, community-based non-profit agencies have lost an average of one-third VOCA funds, which amounts to as much as 90 percent of funding for some programs.

Crime impacts everyone – no one intends on being a victim, and any one of us can be impacted. One dual rape crisis and domestic violence agency reports that with the looming staffing cuts, full-time employees will have to take multiple overnight call shifts per week, limiting time to recuperate sufficiently and to take on more cases. Rape crisis and domestic violence programs alike report increasing demand amid the need to lay off staff, meaning increased wait times for survivors needing emergency shelter, hospital advocacy, and information. Survivors with questions about the criminal justice process are losing advocates within criminal justice systems. Support is withering as the demand surges.

We must ask our government actors:

We, as Ohioans, deserve the level of crime victim services that the government knows we need and promises we will get. We deserve fully funded victim services, fully staffed agencies, and rested and rejuvenated staff capable of providing holistic advocacy. Our lawmakers must not forget that we are essential – the government and its constituents need our services. The federal government must not effectively eliminate services it cultivated and has relied on for decades. The state government must understand what will be lost if we close our doors. Local governments must increase support. All levels of government must act expeditiously to ensure our agencies stay open.

Click here to watch the recording of the recent Facebook Live during which leaders from the listed organizations discuss the devastating impact of these funding cuts.

This website uses cookies to improve your experience while you navigate through the website. Out of these, the cookies that are categorized as necessary are stored on your browser as they are essential for the working of basic functionalities of the website. We also use third-party cookies that help us analyze and understand how you use this website. These cookies will be stored in your browser only with your consent. You also have the option to opt-out of these cookies. But opting out of some of these cookies may affect your browsing experience.
Necessary Always Enabled
Necessary cookies are absolutely essential for the website to function properly. These cookies ensure basic functionalities and security features of the website, anonymously.
Functional
Functional cookies help to perform certain functionalities like sharing the content of the website on social media platforms, collect feedbacks, and other third-party features.
Performance
Performance cookies are used to understand and analyze the key performance indexes of the website which helps in delivering a better user experience for the visitors.
Analytics
Analytical cookies are used to understand how visitors interact with the website. These cookies help provide information on metrics the number of visitors, bounce rate, traffic source, etc.
Advertisement
Advertisement cookies are used to provide visitors with relevant ads and marketing campaigns. These cookies track visitors across websites and collect information to provide customized ads.
Others
Other uncategorized cookies are those that are being analyzed and have not been classified into a category as yet.
SAVE & ACCEPT